In networking, a hierarchical design involves dividing the network into discrete layers. Each layer, or tier, in the hierarchy provides specific functions that define its role within the overall network. This helps the network designer and architect to optimize and select the right network hardware, software, and features to perform specific roles for that network layer. Hierarchical models apply to both LAN and WAN design. 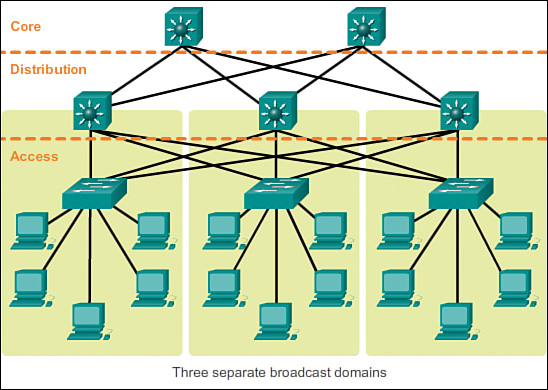 The typical hierarchical design model is broken up in to three layers:

The benefit of dividing a flat network into smaller, more manageable blocks is that local traffic remains local. Only traffic that is destined for other networks is moved to a higher layer.

Layer 2 devices in a flat network provide little opportunity to control broadcasts or to filter undesirable traffic. As more devices and applications are added to a flat network, response times degrade until the network becomes unusable.

The main benefits of Cisco Three-Layer hierarchical model is that it helps to design, deploy and maintain a Scalable, trustworthy, cost effective hierarchical inter-network.