The Communication Medium plays an important role in Networks. If the medium works well and properly, then the speed of transferring data is good but if the medium is not working properly, then your data would be delayed or would not be sent or even can be lost during transmission. In Computer Networks, we call this speed of transmitting data, as DATA RATE.

There are two types of networks that you can set-up.
1. Wired Network
2. Wireless Network

The Wired network is mostly set-up using an Ethernet Cable. This can be done using 3 technologies. 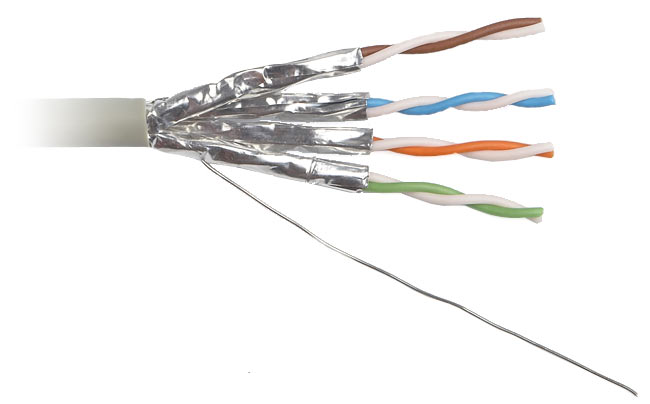 This technology was invented by Alexander Graham Bell. These wires are the most oldest means of communication in computer networking. For more than 100 years, the phone technology has used these wires. Most of use these twisted wires in our homes and offices. These are the least expensive mode of communication used in networks.

In this, there is a pair of  2 copper wire, each 1-2 mm thick, enrolled on each other in a spiral pattern. These are used to avoid interference from the nearby similar pairs. There are number of pairs bundled together in a cable by wrapping the pairs in a protective shield. A pair consists of a single communication link. 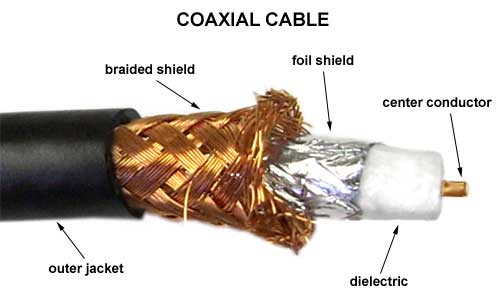 Coaxial Cables same as twisted Wire cables consists of two copper wire. But in this, the two wires are concentric to each other. Coaxial Cables has a wire conductor in the centre , a circumferential outer conductor known as foil shield, and an insulating medium called the dielectric separating these two conductors. The outer conductor is protected in an outer jacket.
Coaxial Cables with this type of formation and special insulation and shielding, can achieve high data transmission rates. Coaxial cables are common in cable television systems.
3) Fibre Optics 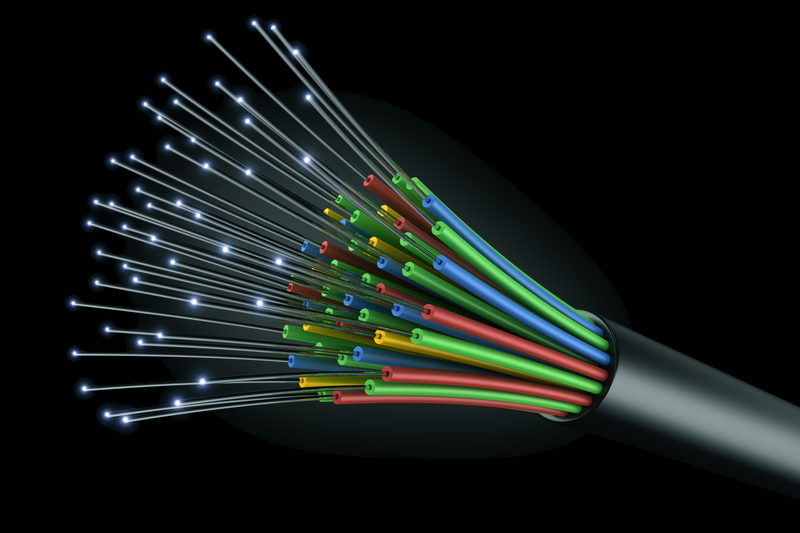 An optical fibre is a flexible,  thin,transparent fibre made of high quality glass or plastic, slightly thicker than a human hair. Or you can also say an optical fibre is a thin, flexible medium that conducts pulses of light, with each pulse representing a bit of your data. Fibre optics can generate high Data Rates, so these are used for long distance communications, that require high speed and least data loss. Optical Fibres have no electromagnetic interference and can process data at GB/sec of speed.
This quality has made them popular in long run data transfers.
In United Kingdom and United States Of America and many other countries, most of them use fibre optics in distance telephone networks.
But as they are very expensive also. So use of Fibre optics in local LAN , institutions, companies etc. is still not very popular. The joining of two or optical fibre is still more complex than joining two electrical wire or cables.
WIRELESS NETWORK
In a wireless network, all participating computers potentially communicate with each other directly
1) Radio Waves 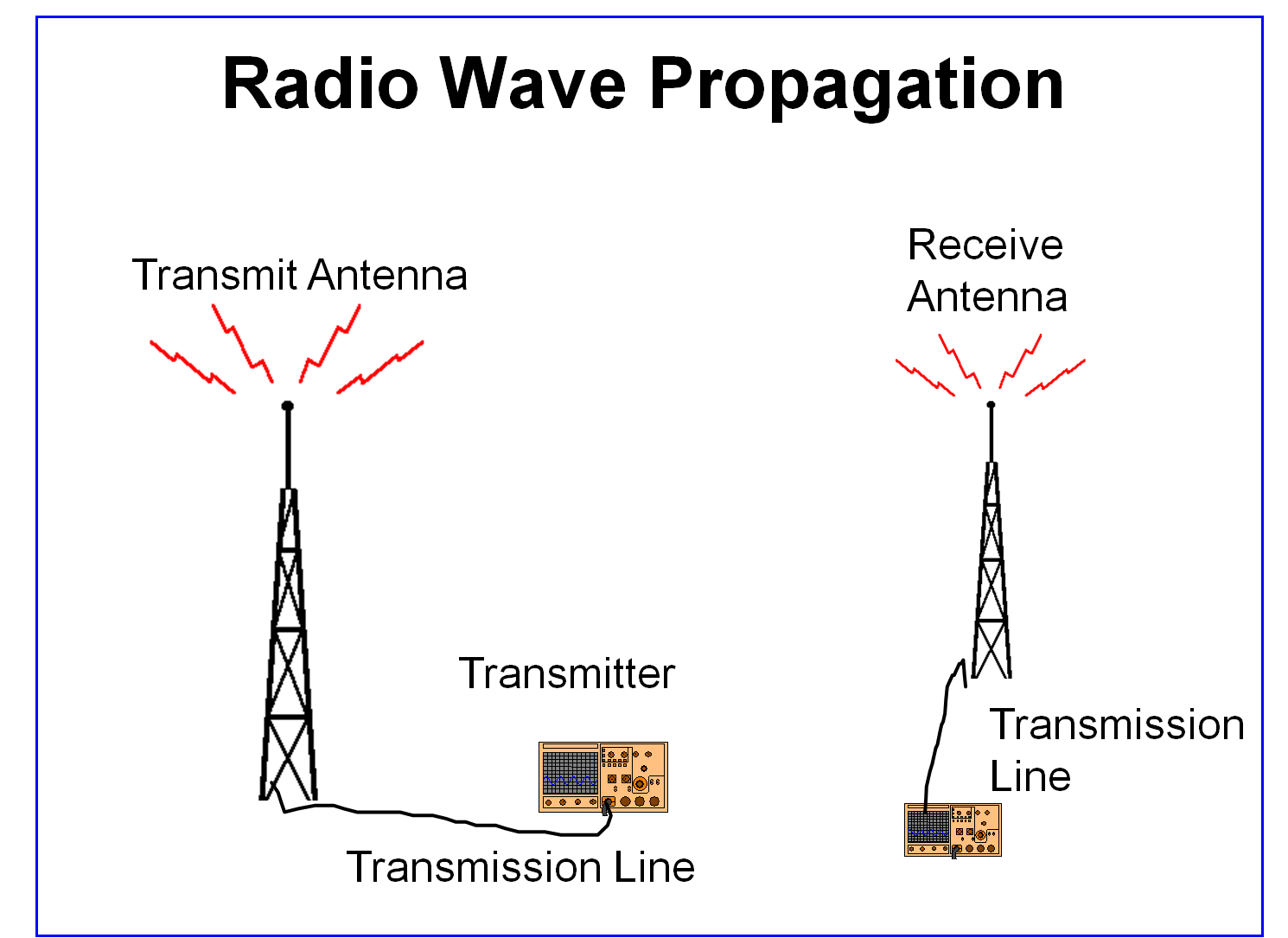 Radio waves are electromagnetic waves with wavelengths greater than infra-red radiations. There frequency varies from as high as 300 GHz to as low as 3 KHz . They travel by speed of light. Radio Waves can be natural and artificial also. Natural Radio Waves occur due to lighting and Artificial Radio waves are used in mobile, radio communication, radar systems etc.
2) Terrestrial Radio Wave Communication

Radio Waves doesn’t need any physical wire to travel. They can penetrate through air, through walls and windows and can be used to deliver long distances messages. Terrestrial Radio Wave Communication can be divided into 3 parts:

A communication satellite links two or more transmitter or receiver that are situated on Earth, called as Ground Stations. The satellite receives the message or transmission on one frequency band, reproduce the signal using a repeater  and transmits the signal or the message on another frequency. There are basically two types of satellites are used in communications. These are:
Here is a Diagram that shows the flow of data through satellite from sender host to the receiver host. 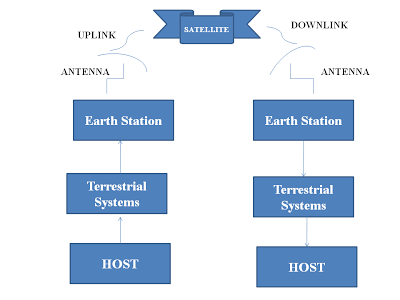