Internet Protocol version 6, is a new addressing protocol designed to incorporate whole sort of requirement of future internet known to us as Internet version 2. This protocol as its predecessor IPv4, works on Network Layer (Layer-3). Along with its offering of enormous amount of logical address space, this protocol has ample of features which addresses today’s shortcoming of IPv4.

So far, IPv4 has proven itself as a robust routable addressing protocol and has served human being for decades on its best-effort-delivery mechanism. It was designed in early 80’s and did not get any major change afterward. At the time of its birth, Internet was limited only to a few Universities for their research and to Department of Defense. IPv4 is 32 bits long which offers around 4,294,967,296 (232) addresses. This address space was considered more than enough that time. Given below are major points which played key role in birth of IPv6:

Till date, Internet Protocol has been recognized has IPv4 only. Version 0 to 3 were used while the protocol was itself under development and experimental process. So, we can assume lots of background activities remain active before putting a protocol into production. Similarly, protocol version 5 was used while experimenting with stream protocol for internet. It is known to us as Internet Stream Protocol which used Internet Protocol number 5 to encapsulate its datagram. Though it was never brought into public use, but it was already used.

Here is a table of IP version and their use: 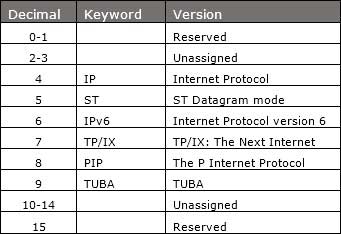 After IPv4’s development in early 80s, the available IPv4 address pool begun to shrink rapidly as the demand of addresses exponentially increased with Internet. Taking pre-cognizance of situation that might arise IETF, in 1994, initiated the development of an addressing protocol to replace IPv4. The progress of IPv6 can be tracked by means of RFC published:

June 06, 2012 some of Internet giants chose to put their Servers on IPv6. Presently they are using Dual Stack mechanism to implement IPv6 parallel with IPv4.