You can use Microsoft® Web Platform Installer (Web PI) to easily install Internet Information Services (IIS) and applications that run on IIS. However, if you choose to install IIS manually, you can use this article for guidance. You can also refer to Installing and Configuring IIS 7.
IIS 7.0 is the Web server role in Windows Server® 2008 and the Web server in Windows Vista®. IIS 7.5 is the Web server role in Windows Server® 2008 R2 and the Web server in Windows® 7. Windows Server 2008 R2 and Windows Server 2008 operating systems have all the IIS features needed to support the hosting of Web content in production environments. Windows 7 and Windows Vista also include IIS features, but the available features depend on the operating system versions.
The Web server was redesigned in IIS 7.0 to enable you to customize a server by adding or removing modules to meet your specific needs. Modules are individual features that the server uses to process requests. For example, IIS 7.0 and IIS 7.5 use authentication modules to authenticate client credentials and use cache modules to manage cache activity. Both versions of IIS also provide:
New in IIS 7.5
IIS 7.0 and IIS 7.5 are together known as IIS 7; however, IIS 7.5 and Windows Server 2008 R2 include several new features not found in IIS 7.0:
Before You Begin
Ensure that you have administrative user rights on the computer on which you plan to install IIS 7. Note that by default, you do not have administrative user rights if you are logged on as a user other than as the built-in administrator, even if you were added to the local Administrators group on the computer (this is a new security feature in Windows Server 2008 called Local User Administrator).
Log on either to the built-in administrator account, or explicitly invoke applications as the built-in administrator by using the runas command-line tool.
Note: You can run runas /user:administrator cmd.exe so that every application you run from that command line will be elevated, eliminating the need to use the runas syntax from that command line.
If you are logged on to an account other than the built-in local administrator account, you may see the following security alert dialog box. 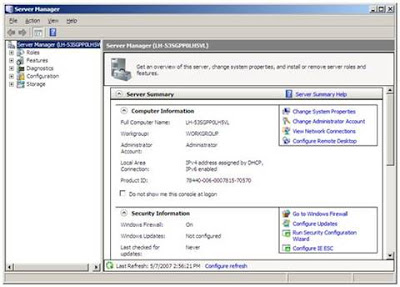 Figure 2: Server Manager2. In the Server Manager window, scroll down to Roles Summary, and then click Add Roles. The Add Roles Wizard will start with a Before You Begin page. The wizard asks for verification of the following:

b. The network settings, such as IP addresses, are configured.

c. The latest security updates from Windows® Update are installed.

3. Select Web Server (IIS) on the Select Server Roles page. An introductory page will open with links for further information.

Note: When you use the Add Roles Wizard to install IIS, you get the default installation, which has a minimum set of role services. If you need additional IIS role services, such as Application Development or Health and Diagnostics, make sure to select the check boxes associated with those features in the Select Role Services page of the wizard. 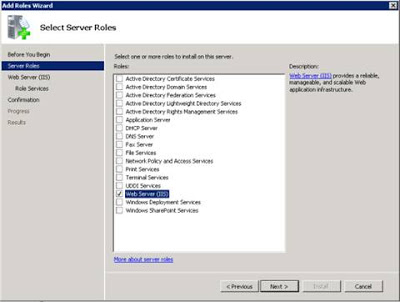 Figure 3: Select Server Roles4. Select the IIS services to be installed on the Select Role Services page. Add only the modules necessary. In this case, ASP.NET is selected, and a description of ASP.NET appears in the right pane. Once desired modules are added, click Next. 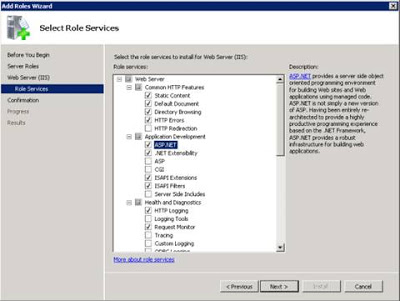 Figure 5: Wizard warning page6. IIS is now installed with a default configuration for hosting ASP.NET on Windows Server. ClickClose to complete the process. 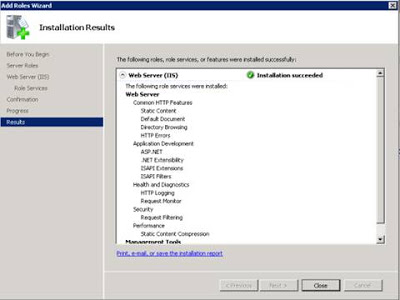 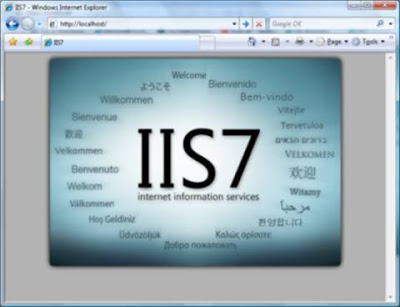 Figure 7: Default Web siteNote: Install only the absolutely necessary IIS services to minimize the IIS installation footprint. This also minimizes the attack surface, which is one of the benefits of IIS 7.
Use a Script to Install IIS 7.5 on Windows Server 2008 R2You can also use a script to install IIS 7.5. Note that if you use this script, you get the full IIS 7 installation, which installs all available feature packages. If there are feature packages you do not need, you should edit the script to install only the packages you require. For more information, see Installing IIS 7.5 on Windows Server 2008 R2.

To install IIS 7.5 with a script, type the following at a command prompt:

In the Windows Server 2008 and Windows Vista operating systems, Pkgmgr.exe is used for unattended scripts, letting you install or uninstall optional features from a command prompt or scripts. (Note: Pkgmgr.exe replaces Sysocmgr.exe which was used in Windows Server® 2003.) For instructions and an overview of Pkgmgr.exe, see Installing IIS 7.0 from the Command Line. See also Unattended Setup to Install IIS 7.0. Note that to use Pkgmgr.exe, you must make sure you have administrative user rights on the computer. 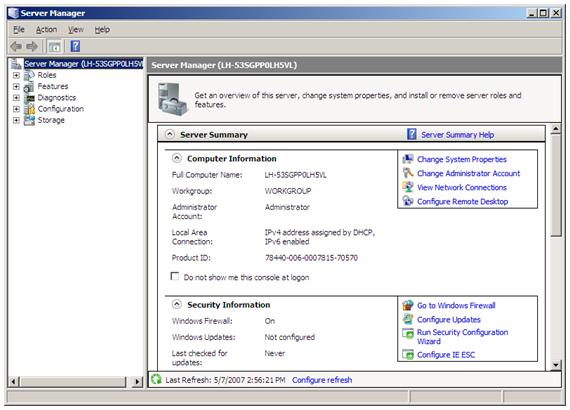 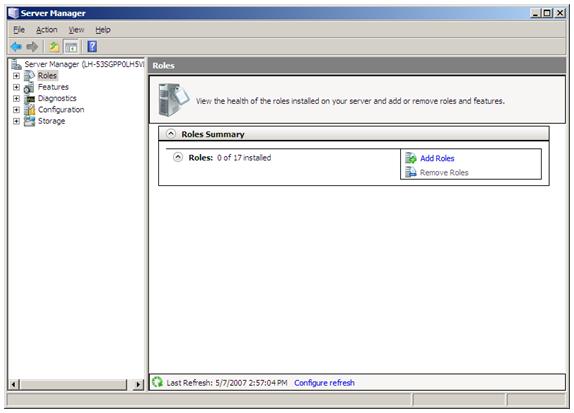 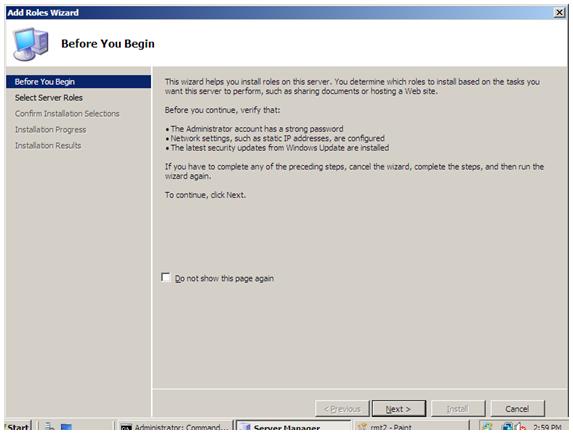 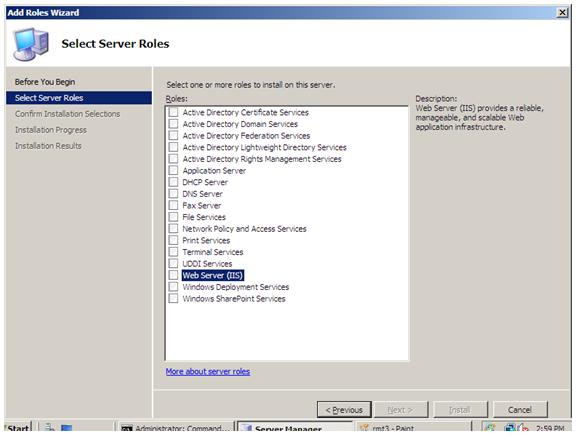 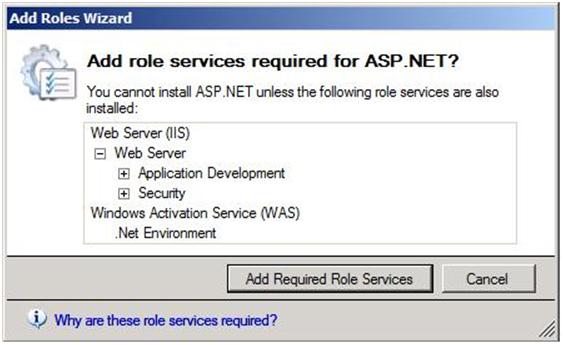 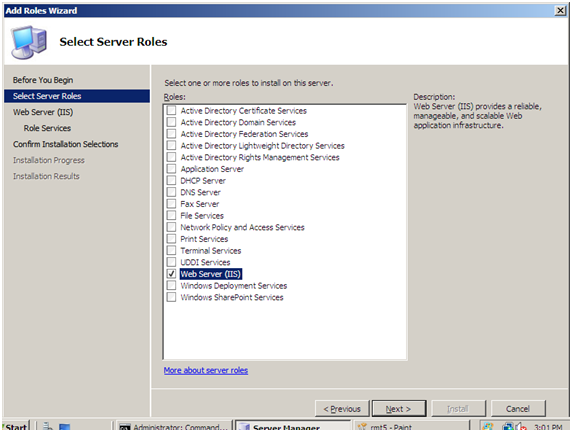 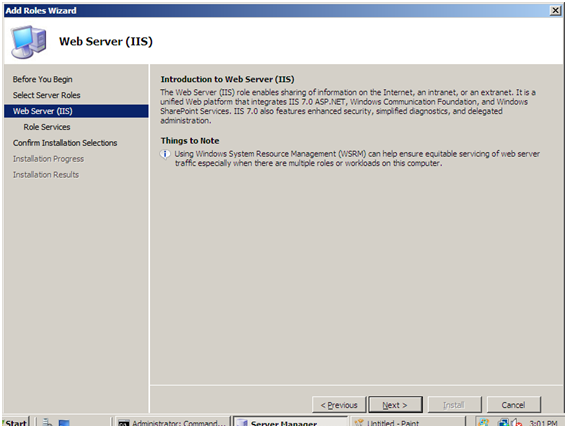 Figure 14: Introduction to Web Server dialog box8. The Add Roles Wizard displays a list of all IIS 7.0 features available to install as shown below. Note that features comprising the default install are pre-selected. 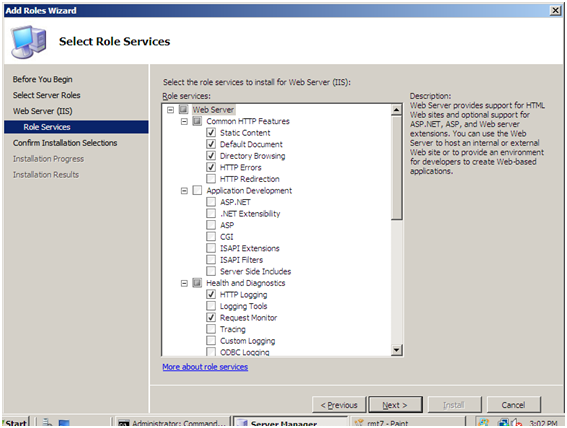 Figure 15: Web Server Features Listed9. To install just the IIS 7.0 default features, click the Install button, and then proceed to Step 14. If you need to install additional features, proceed to step 10.

10. For this example, we install additional IIS features. Select the check box for ASP.NET. The Wizard warns if adding an IIS feature will also cause other features to be installed. 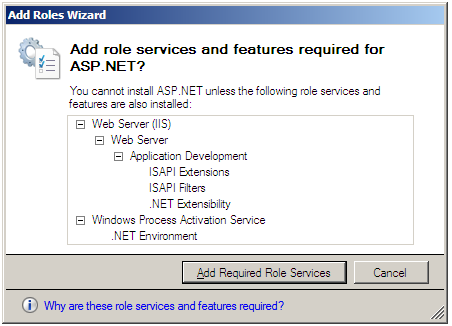 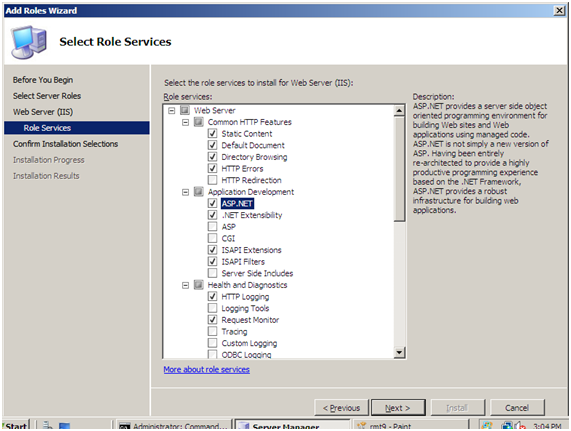 Figure 17: Add Features For Web Server13. When you have selected all the features you require, click Next to continue.

14. The Wizard provides a summary of what will be installed. 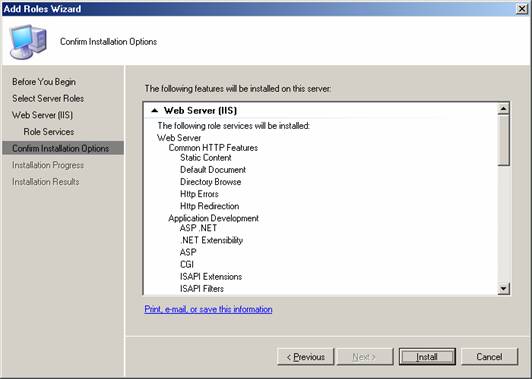 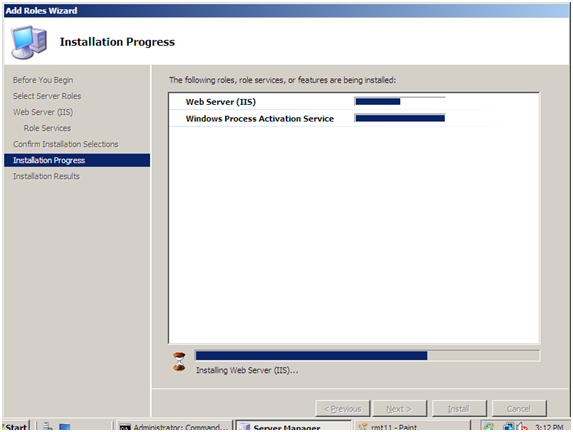 Figure 19: Install Progress16. When the IIS 7.0 installation is complete, the following dialog box opens. Click Close to return to the Server Manager. 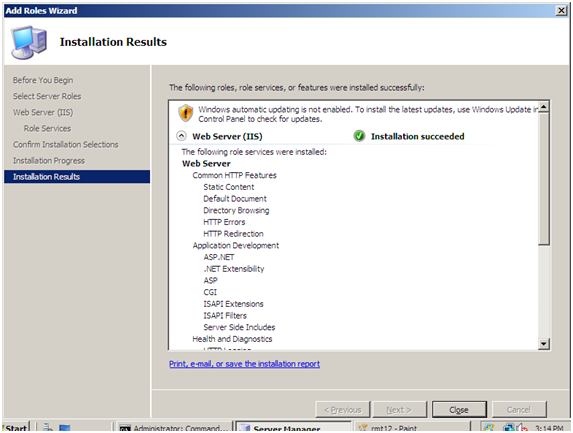 Figure 20: Installation Summary17. You can now perform a quick check to verify that IIS 7.0 is installed. Start the Windows® Internet Explorer® Web browser, and enter the address http://localhost. You should see the default IIS “Welcome” page.