Recently ( I know it’s late) I have switched to Windows 8 from Windows 7 completely and physically. I was having two physical hard disks and Windows 7 64 bit and 32 bit on each disks. One more new hard disk was added for Windows 8 and it worked great. But, my main idea was to utilize other old physical disks space and get rid of Windows 7 completely. There was a catch and I stuck. Even though I have booted my computer from Windows 8 (from newly added hard disk), I could not format a particular partition which was created earlier while installing Windows 7 on different disk. That was the ‘System’ partition on my computer.

In my case even though I have connected the new hard disk on SATA 0 port, that’s why the disk has become Disk 0, but the Disk 1 was having the system partition earlier. I missed to take the screenshot before the changes, but I’m sure below screenshot will give an idea how it was. 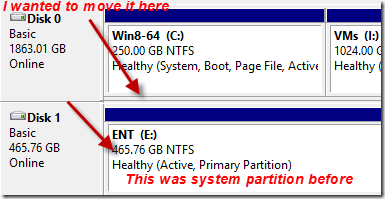 Change The System Partition to Different Disk in Windows 8

1) Restart the Windows 8 computer and login to BIOS.

Save the BIOS changes and reboot the machine.

3) Do not panic, probably your Windows 8 will not boot now. Because there is no system partition (or information) on the first boot hard drive now. You need to have Windows 8 bootable DVD to boot the machine.

4) Boot the machine with Windows 8 DVD and select ‘Advanced options’ under Troubleshoot. Here you need to select ‘Automatic Repair’. 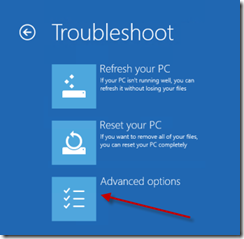 Windows 8 will automatically detect and repair the startup issues, I assume during this process it makes the first partition of first boot hard disk as ‘System’ partition.

5) Once repair completed and rebooted successfully, you can use Windows 8 without any issues. Now if you go to disk manager, you could see that System partition had been moved to different disk where you wanted.

I hope this helps someone