All end devices and network devices connected to the Internet require an operating system (OS) to help them perform their function.

When using the CLI, the user interacts directly with the system in a text-based environment by entering commands on the keyboard at a command prompt. The system executes the command, often providing textual output. The GUI interface allows the user to interact with the system in an environment that uses graphical images, multimedia, and text. Actions are performed by interacting with the images on screen. GUI is more user friendly and requires less knowledge of the command structure to utilize the system. For this reason, many individuals rely on the GUI environments. Many operating systems offer both GUI and CLI. 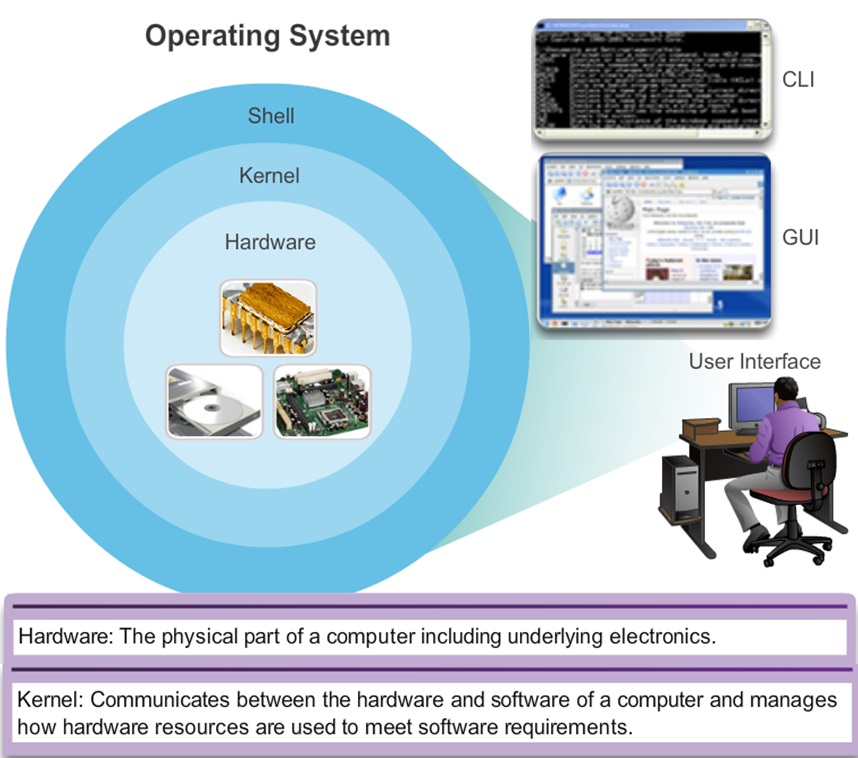 The operating system on home routers is usually called firmware. The most common method for configuring a home router is using a web browser to access an easy to use GUI. Most home routers enable the update of the firmware as new features or security vulnerabilities are discovered.

This chapter will focus on a small business network switch topology. The topology consists of two switches and two PCs and will be used to demonstrate the use of Cisco IOS using the CLI.

The “behind the scenes” functions for switches and routers are very similar. The IOS on a switch or router provides the network technician with an interface. The technician can enter commands to configure, or program, the device to perform various networking functions. The IOS operational details vary on internetworking devices, depending on the purpose of the device and the features supported.

Cisco IOS is a term that encompasses a number of different operating systems that run on various networking devices. There are many distinct variations of Cisco IOS:

Just as a PC may be running Microsoft Windows 8 and a MacBook may be running OS X, a Cisco networking device runs a particular version of the Cisco IOS. The version of IOS is dependent on the type of device being used and the required features. While all devices come with a default IOS and feature set, it is possible to upgrade the IOS version or feature set, in order to obtain additional capabilities.

The IOS file itself is several megabytes in size and is stored in a semi-permanent memory area called flash. The figure shows a compact flash card. Flash memory provides non-volatile storage. This means that the contents of the memory are not lost when the device loses power. Although the contents of flash are not lost during a loss of power, they can be changed or overwritten if needed. This allows the IOS to be upgraded to a newer version or to have new features added without replacing hardware. Additionally, flash can be used to store multiple versions of IOS software at the same time. 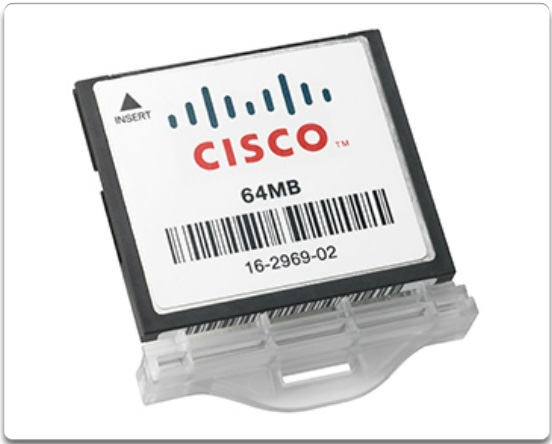 In many Cisco devices, the IOS is copied from flash into random access memory (RAM) when the device is powered on. The IOS then runs from RAM when the device is operating. RAM has many functions including storing data that is used by the device to support network operations. Running the IOS in RAM increases performance of the device, however, RAM is considered volatile memory because data is lost during a power cycle. A power cycle is when a device is purposely or accidently powered off and then powered back on.

The quantity of flash memory and RAM memory required for a given IOS varies dramatically. For the purposes of network maintenance and planning, it is important to determine the flash and RAM requirements for each device, including the maximum flash and RAM configurations. It is possible that the requirements of the newest versions of IOS could demand more RAM and flash than can be installed on some devices.

Each feature or service has an associated collection of configuration commands that allow a network technician to implement it. 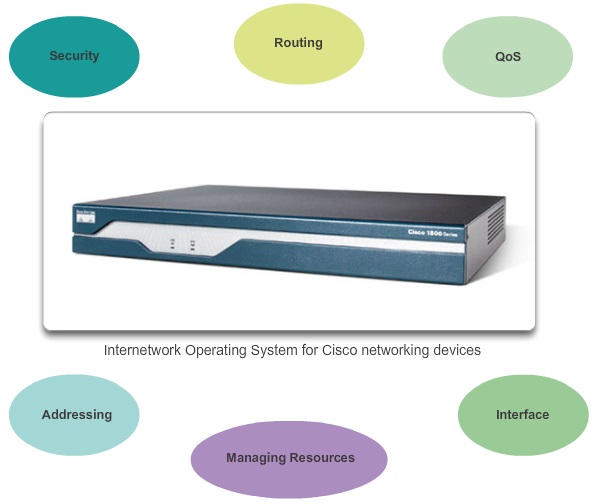 The services provided by the Cisco IOS are generally accessed using a CLI.