Within a broadcast domain, each computer can communicate directly with another computer. A switch acts as a buffer and checks data packets, or frames, being sent between computers. Only when a broadcast frame is sent do all computers on the broadcast domain receive the frame, otherwise the switch sends the frames to the receiving computer only. 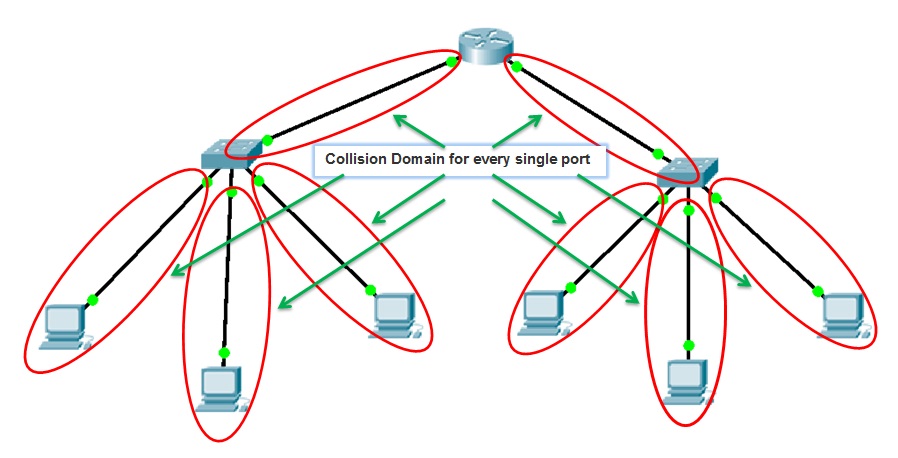 Only one device in the collision domain may transmit at any one time, and the other devices in the domain listen to the network in order to avoid data collisions. Because only one device may be transmitting at any one time, total network bandwidth is shared among all devices. Collisions also decrease network efficiency on a collision domain; if two devices transmit simultaneously, a collision occurs, and both devices must retransmit at a later time.
Modern wired networks use a network switch to eliminate collisions. By connecting each device directly to a port on the switch, either each port on a switch becomes its own collision domain (in the case of half duplex links) or the possibility of collisions is eliminated entirely in the case of full duplex links.
When creating any Ethernet LAN, you use some form of networking devices—typically switches today—a few routers, and possibly a few hubs. The different parts of an Ethernet LAN may behave differently, in terms of function and performance, depending on which types of devices are used. These differences then affect a network engineer’s decision when choosing how to design a LAN. The terms collision domain and broadcast domain define two important effects of the process of segmenting LANs using various devices.

The Importance  of Collision and Broadcast Domains on LAN Design

When designing a LAN,  when choosing the number of devices in each collision domain and broadcast domain. First, consider the devices in a single collision domain for a moment. For a single collision domain:
For example, you might have ten PCs with 10/100 Ethernet NICs. If you connect all ten PCs to ten different ports on a single 100-Mbps hub, you have one collision domain, and the PCs in that collision domain share the 100 Mbps of bandwidth.
That may work well and meet the needs of those users. However, with higher traffic loads, the hub’s performance would be worse and you need a switch . Using a switch instead of a hub, with the same topology, would create ten different collision domains, each with 100 Mbps of bandwidth. Also, with only one device on each switch interface, no collisions would occur. This means that you could enable full duplex on each interface, effectively giving each interface 200 Mbps.
Using the switches instead of hubs seems like an obvious choice given the overwhelming performance benefits. Frankly, most new installations today use switches exclusively.
Thanks, If you like this tutorial please share this article to your friends in FB, Twitter,
Tags:what is collision domain and broadcast domain